As the protagonist to the Kirby series, Kirby is the most popular character in the series. The only main series ouside of his own Kirby has appeared in is the Super Smash Bros. series.

Kirby is round in shape with small stubbish hands and two long oval feet. Some of his abilities change his skin color, but he is primarily pink. He has blue eyes and two blush marks on his cheek.

Kirby on his Warp Star.

Kirby inhaling.
Add a photo to this gallery 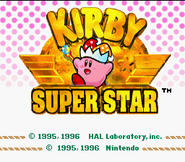 Kirby on the Kirby Super Star title screen.
Add a photo to this gallery
Retrieved from "https://thesupergaming.fandom.com/wiki/Kirby_(character)?oldid=11745"
Community content is available under CC-BY-SA unless otherwise noted.