Knuckles the Echidna (ナックルズエキドナ "Nakkuruzuekidona") is a character from the Sonic series and an ally to Sonic the Hedgehog. He was originally an enemy to Sonic, but became friends with Sonic and Tails after the events in the popular Sonic and Knuckles. Knuckles is tasked with being the perminate Guardian of the powerful Master Emerald that keep his home, Angel Island, (a floating island in the sky) afloat. He is the last survivor of his race, known as the Knuckles Clan, at least as far as he knows. He has had little contact with anyone else but the animals that reside on Angel Island

Knuckles is mosty like Sonic, he can move fast, but what's special about him is that he can climb walls and punch things with his huge knuckles on his hands. Knuckles can also obtain super transformations like Sonic as well. Knuckles can transform into Super and Hyper Knuckles just like Sonic can, but his body pulses a bright pink in his transformed state. In his transformations, Knuckles gains super strength, and near invincibility. The only differences between his Super and Hyper states is that when Knuckles is running in his hyper state he leaves behind afterimages of himself.

Knuckles appeared in Archies Sonic the Hedgehog comic book series, and eventually got his own spin-off series called Knuckles the Echidna. The spin-off series ran for 32 issues, expanding the story of Knuckles' search for his father and his predecessors The Brotherhood of Guardians. The Guardians kept watch over the Master Emerald generations before Knuckles, and fought the Dark Legionarries, a technology worshipping Echidna clan who's goal is ultimate power. 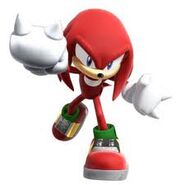 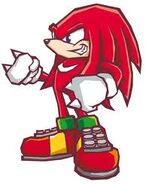 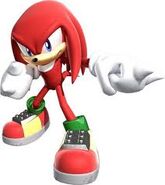 Knuckles in Shadow the Hedgehog 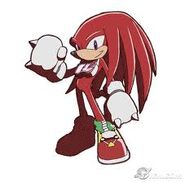 Knuckles in Mario and Sonic at the Olympic Games 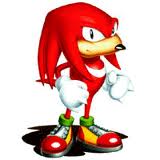 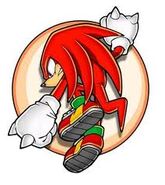 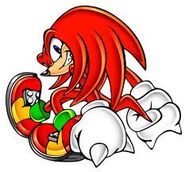 Knuckles in Sonic Adventure
Add a photo to this gallery
Retrieved from "https://thesupergaming.fandom.com/wiki/Knuckles_the_Echidna?oldid=11747"
Community content is available under CC-BY-SA unless otherwise noted.