Mario, (named マリオ Mario in Japan), is the mascot of the company Nintendo and has been referered to as "Mr. Video Game" due to his popularity. He has achieved vast amounts of popularity worldwide, and has appeared on various media such as television and comic books.

The history of Mario is quite clear in the way that Nintendo came up with him and put him into many good video game styles. After his first appearance in Donkey Kong, Nintendo noticed fans liked him and came up with many more games featuring Mario. Pretty soon Mario was running and leaping in his own series of games and making many debuts in other games. He has held very strong and is even the mascot of Nintendo. His being on media also made him a popular video game character.

Mario's first debut was in 1981 alongside another famous video game icon, Donkey Kong. Maio's first debut was in a game called Donkey Kong for arcade consoles and Ataries. It was a popular yet hard game but it was enjoyable to play at the time. Mario's first debut in a game by his own series was called Mario Bros. A game where you had to dodge and defeat sewer (or pipe) animals. Later came his first platforming game called Super Mario Bros. It was very popular at the time and found its way into many fans! Since then Mario is remebered as a great video game icon.

When Mario gets the Fire Flower, he can shoot fire balls. He's able to take more two hits before he loses a life.

When Mario gets a Starman, he becomes invinible and starts to flash colors

. (This only lasts for a few seconds.)

When Mario gets the Super Leaf, he can fly and attack with his tail.

When Mario gets the Hammer Suit, he can throw hammers to knock out enemies

When Mario gets the Frog Suit, he can swin in water faster and better.

When Mario gets the Tanooki Suit. In Super Mario Bros. 3, he can fly, use his tail as a whip, and turn into stone. In Super Mario 3D Land, however, the original Tanooki suit only allowed hovering and the tail whip.

Mario in his Metal Suit. This first appeared in Super Mario 64 in the Dank Dank Cave level. A special area allowed you to hit the Green ! Block to achieve this cap. He is also a playable character in Mario Kart 7 . His logo in the game has a coloring change: from Mario's red logo to gray.

"Here we go again!" -Mario after getting a continue in New Super Mario Bros. Wii.

"It's-a me! I've been on fire lately, but I hope you'll challenge me!" -Mario Golf Toadstool Tour 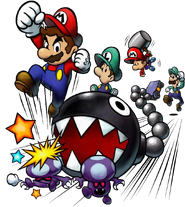 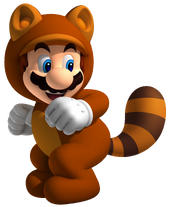 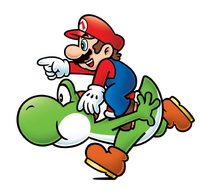 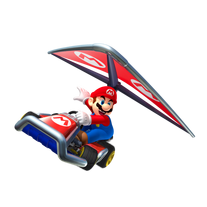 Mario Kart 7
Add a photo to this gallery
Retrieved from "https://thesupergaming.fandom.com/wiki/Mario?oldid=11098"
Community content is available under CC-BY-SA unless otherwise noted.