Ryuhi is the main character of the Hiryū no Ken fighting games who is the leader of the Dragon Warriors. He is comparable to Goku from the Dragonball franchise.

In an unexplored region of China a young child was brought hight in the mountains. A wise teacher Juan discovered him and started teaching him whcih helped young Ryuhi learn Kempo.

One day Juan was attacked and robbed of his Hiryu-no-Ken scrolls. The only scroll that wasn't taken was Ryuhi's Book of the Mind's Eye. In Juan's last request orders Ryuhi to travel to Shorinji. Gengai, the bishop Shorinji dubs him one of the titans of Shorinji Kempo.

In flying dragon Ryuhi begins his quest to receive the scrolls from the Tusk warriors.

Ryuhi is on a constant quest to stop the Tusk Warriors, an army who stole the seven sacred scrolls and killed his master. Due to his deep prejudice against the Tusk Warriors he has a rivarly Suzaku, the right-hand man of their boss. 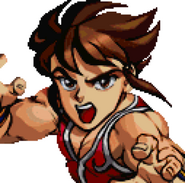 Add a photo to this gallery
Retrieved from "https://thesupergaming.fandom.com/wiki/Ryuhi?oldid=10108"
Community content is available under CC-BY-SA unless otherwise noted.