Start a Wiki
Shadow the Hedgehog, a Sonic the Hedgehog Series game was released in 2005 for the Gamecube, and PS2. The game is based of a popular character named Shadow the Hedgehog, who appeared in Sonic Adventure 2 in 2001. The game recieved mediocre to negative reception, and is infamous for fantasy violence; destruction; and cursing.

Shadow the Hedgehog is a canonical spin-off game of the Sonic The Hedgehog Series, based on the character Shadow the Hedgehog who got his own game due to overwhelming response to his popularity from the Sonic fan base. The game was created by Sega in collaboration with Sonic Team. The game is well known for its dark, violent theme with the use of weapons like guns; and swearing by use of the word D*** , which is said by many characters (including Shadow and Sonic). The voice cast for the game has changed, with the voices of 4-kids Sonic X, transitioning to the video game franchise replacing some notable actors like Ryan Drummond and David Humphery.

Jason Griffith, being the voice of Sonic and Shadow in the tv series, reprises both roles in the game. The game comprises of a choice-consequence system, where if Shadow completes one of the three missions for each stage; Hero, Dark, and Neutral, the choices that he makes paves way for how the story will play out. This concept was going to be introduced in Sonic Adventure 2, but was removed for mysterious reasons. 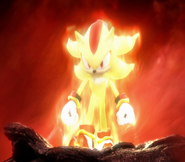 Add a photo to this gallery
Retrieved from "https://thesupergaming.fandom.com/wiki/Shadow_the_Hedgehog_(game)?oldid=10721"
Community content is available under CC-BY-SA unless otherwise noted.