Silver the Hedgehog is a white colored hedgehog who comes from a dystopian like future, 200 years after the events of Sonic the Hedgehog (2006). Silver has the ability to use Psychokinesis, which allows him to control things with his mind. At first, Silver saw Sonic as a threat to the future in the game Sonic '06, as he thought that he would unleash the Iblis on the world and cause the devistation he lives in during the future. His best friend and companion is Blaze the Cat, who helps Silver in the fight to save the future.

Silver the Hedgehog lives in a post apoctalyptic future earth where the flames of the fire demon creature known as the Iblis have engulfed the world with fire. Silver is friends with Blaze the Cat and they grew up together in this devistated world, so one day they promised each other that they would fight back and risk their lives to put an end to the Iblis once and for all. Every day and night they fight the Iblis but their seemed to be no end to him, until they come across a mysterious hedgehog named Mephilies the Dark who tells them of an Iblis Trigger. The Iblis Trigger released the Iblis on the world 200 years ago, and that in order to save their world they must travel back to the past; find the Iblis Trigger; destroy him; and save their world.

So Mephilies sends Silver and Blaze to the past where Iblis Trigger was still alive at the time. Silver finds Iblis Trigger at the Soleanna Festival of the Sun, trying to save Princess Elise from the clutches of Dr. Eggman, and fails. this is also the moment where Silver meets Amy Rose, who decides to help him look for help find the person he's looking for, so in exchange for helping him, he helps her look for Sonic. Later on Silver finds the Iblis Trigger who turns out to be none other than Sonic himself, who is also with Princess Elise.

Silver attacks Sonic with his pyschokinesis, and jokes seeing that Sonic can't defend himself, asking how could he possibily be the Iblis Trigger that Mephilies was talking. When Dr. Eggman captures Elise again, Sonic tries to run to save her, but gets paralyzed momentarily by Silver's pyschokynesis and then attempts to make the final blow and end Sonic's life when Amy stands up to him in disbelief that he's trying to kill Sonic. Silver explains that Sonic's actions would cause the devistation of his world, but Amy says that he would never do anything evil, and she would choose him over the world, allowing Sonic to escape.

Silver contemplates whether killing Sonic would be the right thing to do, when he is approached by Blaze who convinces him that they must do anything at any cost to save their world. Silver and Blaze attempt to track down Sonic who had last been at Dr. Eggman's White Acropolis base, where they defeat Eggman's Egg-Cereberus, and gain a Chaos Emerald. Then Mephilies tells the two that Sonic is at Soleanna's train depot, so Silver finds Sonic again with Elise. Silver attempts to kill Sonic again, and Elise gets captured within the moment. Then Shadow the Hedgehog shows up allowing Sonic to escape.

Silver mistakes Shadow for Mephiles, and they begin to fight. The fight ends with a stand-still, where Silver attempts to attack Shadow to finish him off when Shadow induces a Chaos Control and kicks Silver in the back of the head. Silver falls to the ground but gets back up and states that he refuses to lose, and charges at Shadow again when they both induce a Chaos Control that opens a portal to 10 years in the past. Shadow tells Silver the real intentions of Mephilies, and to learn the truth about the Solaris Project he has to follow him through the portal, so Silver follows him.

Shadow and Silver arrive at the Aquatic Base where the Duke of Soleanna is trying to harness the power of Solaris, the Sun God of Soleanna. The test goes haywire and Elise(who is 7 at the time) arrives in the room showing concern for her father when an explosion occurs, and the Duke shields Elise from being injured. Out of the explosion forms two beings who create Solaris; Mephilies and Iblis. Shadow pursues Mephilies with the Scepter of Darkness that the Duke gave him, and Silver pursues the Iblis.

Shadow seals away Mephilies in the Scepter, and Silver paralyzes lblis long enough for the Duke to seal him into Elise. The Duke, entrusting Silver to taking her to a safe place, dies after performing the sealing ritual from obtaining injuries from the explosion. Silver and Shadow meet up outside the base so they can return to the past to prevent the Iblis from being released in the present time, before they leave Silver lays Elise at the bottom of a tree, leaving the Scepter of Darkness and Chaos Emerald with her for a good luck charm.

When Silver arrives in the present he tells Blaze that Mephilies lied to them and that Sonic is not the Iblis Trigger. So together they seek out Sonic to help save Elise who had been captured by Dr. Eggman. Silver approaches Sonic in Kingdom Valley and tells him theres been a change of circumstances, and Sonic smiles thanking him for the help. Unfortunately, Sonic and Silver arrive too late and the Egg Carrier crashes in the distance with Elise in it. Silver tells Sonic that things can still change because of the two Chaos Emeralds thye both obtained. Sonic and Silver induce a Chaos Control allowing Sonic to go several hours into the past to save Elise before the crash, which in could change Silvers world in the process.

Sonic hands Silver his Chaos Emerald allowing him to go his world and change things there. Silver and Blaze go to their world and begin their final confrontation with the Iblis. WIth the Iblis temporarily formed in a ball of plasma, Silver performs the sealing ritual on himself to be the Iblis' vessel, but his soul is not purged with flames like Blaze' is. Blaze takes over performing Chaos Control sealing the Iblis in herself and transporting herself in another dimension, saving the future. 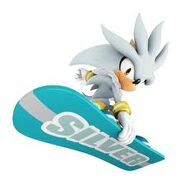 Silver in Mario and Sonic in the Winter Olympic Games

Silver in Archie Comics' Sonic the Hegdehog Series
Add a photo to this gallery
Retrieved from "https://thesupergaming.fandom.com/wiki/Silver_the_Hedgehog?oldid=10367"
Community content is available under CC-BY-SA unless otherwise noted.