Sonic Colors is the last mainstream Sonic game released for the Nintendo Wii and Nintendo DS in late 2010. Sonic Colors was annouced on May 26, 2010 including a small teaser trailer. The full game was released on November 16 in the US. During Pre-release, reception was high for the game at many conventions like E-3 2010.The game came close to winning Best Platformer at E-3 but lost to Metroid: Other M.

After post-release of the entire game, reception for the Wii Version was very high. IGN praised its level design and music score, calling it "The best Sonic game in 18 years". Nintendo Power also chimed in and gave the game a 9/10. The Wii version sold over 1.87 million units worldwide. The DS version didn't do as well as the Wii version, publishers complained about how short the game was compared to the Wii version.

One day Sonic and his best friend Tails investigate Dr. Eggman's Interstellar Amusment Park. Dr. Eggman is thought to have turn over a new leave instead of being the evil genius that he is, decided to build the park out of a sense of remorse for his past attempts to conquer or destroy the world. Sonic however still believes that the Doctor is up to no good, and eventually finds out that he has enslaved an alien race known as Wisps to collect thier mysterious Hyper-Go-On power to enslave the world with a mind control machine. With the assistance of Yacker, a Wisp who came to Sonic and Tails for help, Sonic will use the power of the Wisps exculsive to each game to help him free all the Wisps from Dr. Eggman's imprisonment and save their home world, Planet Wisp. 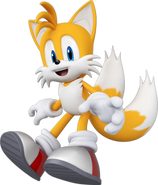 Dr. Eggman
Add a photo to this gallery
Retrieved from "https://thesupergaming.fandom.com/wiki/Sonic_Colors?oldid=11744"
Community content is available under CC-BY-SA unless otherwise noted.