The following game is followed by Sonic Colors. Sonic Generations is one of the many installments in the Sonic Series and is one of the many big games SEGA has made in a while. It was created by SEGA and Sonic Team. They worked together to make a Modern and Classic looking game. It was made to honor Sonic's 20th Aniversary. It was honored in bringing Classic Sonic back to a modern looking game. It was in development for a while and when it finally came out, its ratings skyrocketed. It is supposed to mix Classic and Modern times together. It has a total of 3 eras to cover and to enjoy!

The game begins as the player is shifted immediately into classic Green Hill Zone controlling Classic Sonic. Upon the completion of the stage, a mysterious time monster appears in the sky, and then the game shifts to present time. Being led by Tails, Sonic whos not expecting anything, stumble upon a gathering of all his friends. Sonic eventually finds that his friends have come to celebrate his birthday.

While the festivities continue, the same Time Monster from the past appears in the sky, and sucks all of Sonic's friends up into a weird limbo. Sonic attacks the monster but fails and is knocked unconscious. Sonic wakes up in a White World and arrives at a lifeless, colorless Green Hill Zone. After Sonic completes the stage, the Zone returns to life and Tails is revived.

Modern Sonic goes on to explore more zones when he doesnt know he is being followed by Classic Sonic. Modern Sonic arrives in the boss gate room where he sees a reflection of his younger self, where they begin doing the same actions until Dr. Robotnik interuptted. Modern Sonic finds out that their's another Sonic as his younger self jumps through the gate before he does. After he came, Modern Sonic became friends with Classic Sonic although it's hard for them to communitcate. The only time they can communicate is in fan made youtube videos (the easiest way). Or by Modern Sonic just talking. After the big threats of the time eater, Dr. Robotnik of the Past and Dr. Eggman of the future both Classic and Modern threats to the SEGA cast. After they were saved, he was then back to his Modern Place with everyone saved. Modern and Classic Tails Start talking about were Modern Sonic and Modern Tails puts all those gold rings. After the time plate was back and Classic Sonic and Classic Tails went back to Green Hill Zone in 1991.

The Studiopolis cast voice the majoriy of the characters despite Mike Pollock from the 4-kids cast is still voicing Dr. Eggman (this change has been in effect since around early 2010). Also their are some new characters exclusive to this game, which are the Classic Characters.Those are Classic Sonic, Classic Tails, And Classic Eggman. They all play a big role in this game, but Classic Sonic is the only playable Classic Character. 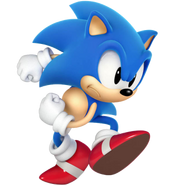 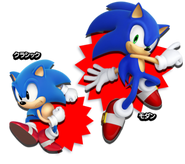 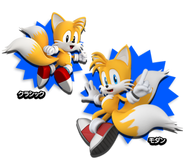 2 Tails'
Add a photo to this gallery

Retrieved from "https://thesupergaming.fandom.com/wiki/Sonic_Generations?oldid=10967"
Community content is available under CC-BY-SA unless otherwise noted.