Sonic the Hedgehog is a video game character who debuted in 1991 on the Sega Genesis console. He's the world's fastest hedgehog and he is meant to compete with Sega's rival, Nintendo, and their mascot, Mario. Sonic was created by Artist Naoto Ōshima, designer Hirokazu Yasuhara, and programmer Yuji Naka, as a blue and peach-skinned, green-eyed, human-like hedgehog, who has the ability to move faster than the speed of sound and to curl up into a ball (like a regular hedgehog), primarily to attack enemies.

Sonic has appeared in his games as the main character. In the first game, Sonic, living on South Island at the time, saw that his animal friends were being turned into robots by none other than the evil Doctor Ivo "Eggman" Robotnik. Doctor Robotnik used Sonic's robot turned friends to take over South Island and eventually the world. Sonic's mission was to find the six legendary Chaos Emeralds before Robotnik does and use their power to defeat Robotnik and save his home.

The process of collecting the chaos emeralds came through special stages, which required the collecting 50 rings and jumping through the gold ring at the end of the stage. Over the next few games Sonic developed many friendships with characters that would help him in the eventual future, including his best friend Miles "Tails" Prower. Sonic crossed over into 3-D platforming in 1998 with Sonic Adventure, considered to be the best 3-D Sonic Game at the time, later titles followed like Sonic Adventure 2 and Sonic Heroes. With the era of the Dreamcast coming to an end, and with millions of dollars in debt from the Sega Saturn, that failed to produce enough profit, Sega decided to test the waters.

Sega began developing Sonic games for different consoles like Nintendo's Gamecube, Microsoft's Xbox, and Sony's Playstation 2. After the release of Shadow the Hedgehog, a chronological spin-off of Sonic's rival and ally Shadow, the series began a turn for the worst as reception for the games declined and it looked as if Sega was nailing the coffin on their own beloved franchise. Things turned back around with Sonic Unleashed in 2008, with Sonic returning to his platforming origins but with a mix of almost racing like gameplay with the popular Sonic Boost feature which allowed Sonic to run faster then ever before. Since then the past two years for the Hedgehog have returned him to his former glory with suprising titles like Sonic 4 : Episode 1 and Sonic Colors. Expectations were exceeded with the titles and publishers gave the games positive reception.

His games are made for a younger generation of gamers including some amount of teens. However, since Classic Sonic fans are not happy with his recent 3-D outings such as Sonic Unleashed or Sonic Colors, Sega has decided to make Sonic Generations to combine the two hedgehogs. 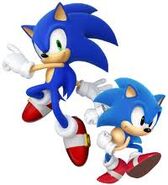 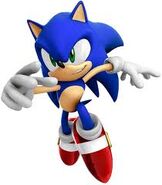 Sonic's artwork from Sonic the Hedgehog (2006).

Sonic's other artwork from Sonic the Hedgheog (2006). 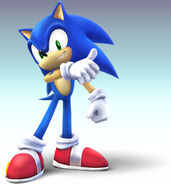 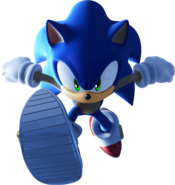 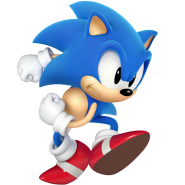 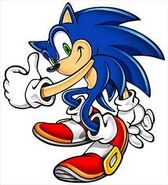 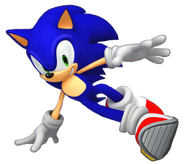 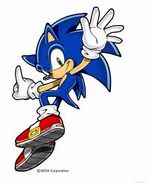 Sonic's 15th Anniversary pose.
Add a photo to this gallery

Retrieved from "https://thesupergaming.fandom.com/wiki/Sonic_the_Hedgehog_(character)?oldid=10993"
Community content is available under CC-BY-SA unless otherwise noted.